JAT is a Japan-based non-profit organization for translators and interpreters. JAT’s mission is to enhance its members’ professional abilities, improve the status of the translation and interpreting professions, and serve the public good by expanding global access to information.

PROJECT Kyoto featured 16 sessions and interactive workshops in four rooms. The first block of four sessions began at 9:00 a.m. and ran until lunch at 11:00. Some attendees ate a bento at networking lunches organized by special interest groups of JAT, and others went to nearby restaurants to eat with fellow translators. The remaining three blocks were held in the afternoon, the last ending at 6:00 p.m. The sessions are listed in the following table.

PROJECT Kyoto actually drew more non-JAT members than members, showing that the general translation community finds JAT activities relevant and rewarding. Many of the sessions were recorded. Videos, handouts, and slides of those sessions will later be made available exclusively to JAT members and PROJECT Kyoto attendees on the JAT website. If you are not a JAT member, please join JAT today to get access to these and many other videos as well as many other benefits of membership.

PROJECT Kyoto would not have been possible without hundreds of hours of careful planning and hard work by the all-volunteer Organizing Committee. The Kansai-based Organizing Committee worked hard to give PROJECT Kyoto a Kansai flavor. As a result, almost all speakers were from the Kansai area or elsewhere in Western Japan, and all but one of the sponsors had a head office or significant presence in Kansai. The members of the committee were:

The generous contributions of PROJECT Kyoto’s sponsors, who are listed on the PROJECT Kyoto website, helped keep the cost of registration very reasonable. The Board of Directors of JAT truly appreciates the hard work of the Organizing Committee and the generosity of the sponsors for making PROJECT Kyoto the huge success it was.

Exhausted after an intense day of learning at PROJECT Kyoto, attendees walked to the nearby New Miyako Hotel to party at the JAT 30th Anniversary Extravaganza. Over 150 people attended. The Extravaganza began at 6:30 p.m. with a 30-minute English rakugo performance by famed British rakugo performer Diane Kichijitsu.

After Diane’s performance, Emcee Ko Iwata called JAT President Marian Kinoshita and JAT Vice President Ben Tompkins to the stage. Marian and Ben invited the PROJECT Kyoto Organizing Committee to the stage, thanked them, and then led the opening kampai with sparkling wine. The attendees then ate, drank, and networked until 8:00 p.m., when they were treated to a slideshow overview of JAT’s accomplishments over the past three decades.

Cathy Eberst, Chair of the IJET-25 Organizing Committee, concluded the Extravaganza with an ipponjime.

JAT thanks special guest and JTF Director Daisuke Terada for traveling to Kyoto to attend, Diane Kichijitsu for tickling everyone’s funny bone, and all the volunteers who made the Extravaganza possible. 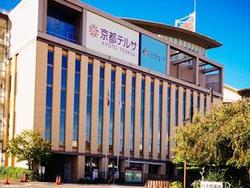 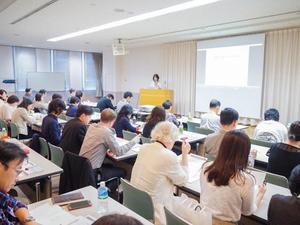 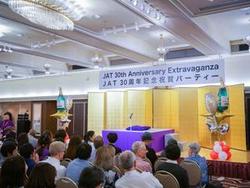 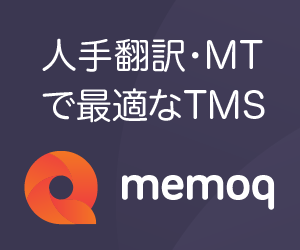 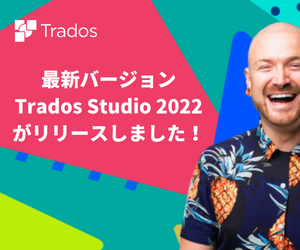